Filipino film “Nakaw” by director Noel Escondo and Arvin “Kadiboy” Belarmino has been chosen to participate in the Short Film Corner of the Cannes International Film Festival this year.

“Nakaw” tells a story of Bateng a boy who triggered a series of life-changing events when he stole an old woman’s purse.

“Nakaw” is a crime/drama/thriller which is a first film collaboration by Arvin Belarmino and Noel Escondo. It also Patsy Ferrer’s (Cut Print Productions) first film producing debut. The 6:45 minutes long film was first screened during Instituto Cervantes’ 15th Manila Spanish Film Festival as an official selection and it has been going the rounds of different film festivals in the country.

As of March 3, 2017, this short film has been officially selected for Festival de Cannes 2017’s Short Film Corner and will be showcased along with different short films from around the world. It will be screened from May 22-28, 2017 at the Cannes Film Festival 2017. 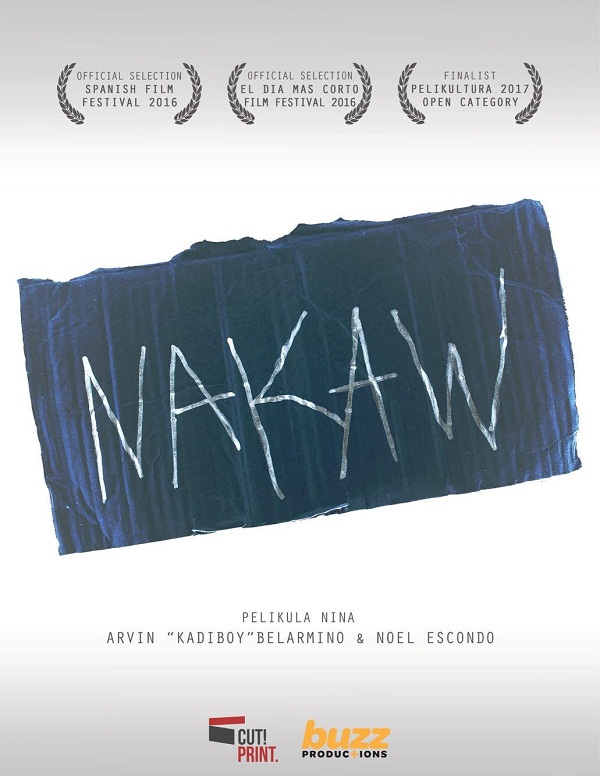 Aside from CANNES, the short film will be screened on March 7 in the PeliKultura Fim Festival 2017 at UP Los Banos this week.

Noel Escondo (Writer & Director) is a two-time Aliw Award nominee as Best Stage Actor when he was still active in theater. He then pursued writing, producing and directing on TV until he decided to work in a digital agency. This is his first venture in short film making.

Arvin Belarmino (Writer & Director) is born in Masbate in August 1987 and spent most of his years growing up in Quiapo, Manila. He took up Bachelor of Science in Information Technology in De La Salle University Dasmariñas Cavite. As young as 8 years old, he discovered his love for movies when his father first took him to the video stores.

Kadiboy started writing in 2004 and has written several screenplays since then. He may not have taken a degree in filmmaking but his passion for films remains steadfast, which inspired him to establish the group Halikon in 2006 as his way of encouraging his fellow filmmakers to pursue their passion.

Kadiboy is influenced by the works of Lino Brocka, Peque Gallaga, Harmony Korine and Lars von Trier. His forte is writing dark comedy and satire because he’s the kind of writer who enjoys capturing and manipulating the viewers’ emotions. He’s working on a few screenplays, which he plans to bring to the screens in the coming years.

Patsy Ferrer (Executive Producer) is the owner of “Nakaw” is Cut! Print Productions’ pilot project. She started her career as an Online Marketing Manager for Microsoft Philippines fresh out of college, then pursued her passion for film by producing several videos for Jump Digital under Buzz Productions.

She also hosts and writes her own vlog (video blog) called “KoolTura” in PalaBuzz TV which
can also be seen in her own Facebook page ThePatsyFerrer.

Cut! Print. (Is what the director yells after a good take.) is an ensemble of Filipino film makers that aims to help local filmmakers produce their original work.