Have you ever thought how Justin Bieber’s “Sorry” would have sounded if it came out in the 60’s or if Ed Sheeran’s “Perfect” could make a 1950’s prom even more romantic?

The once-popular phrase may be “everything old is new again,” but for Scott Bradlee, it might read everything new is old again. 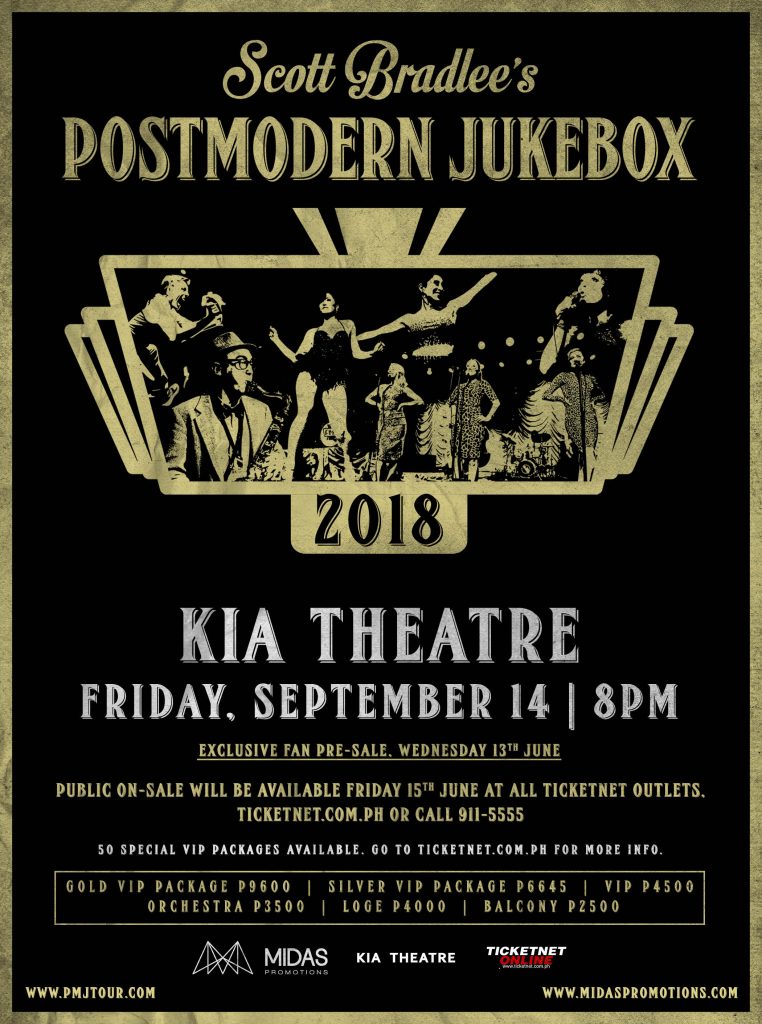 “Today’s hits, yesterday” was the inspiration behind Post Modern Jukebox’s unique retro-reworkings of modern pop and rock hits. The multi-talented collective reimagines contemporary pop, rock and R&B hits in the style of various yesteryears, from swing to doo-wop, ragtime to Motown – or, as Bradlee himself puts it, “pop music in a time machine.”

It’s an idea Bradlee had as far back as high school.

“When I was in high school, I was getting into really like early jazz, stuff like ragtime and New Orleans music and things like that,” Bradlee said. “You can imagine that most of my peers weren’t really into that kind of music. They didn’t play a whole lot of ragtime at school dances back then. So I wanted to be able to share this with my friends, and one thing I wound up doing since I had pretty good ears—I taught myself a lot by ear—I would just kind of pick out pop songs that they liked and turned them into ragtime or jazz and stuff.”

PMJ had its humble beginnings in the cramped basement of Bradlee’s apartment in Queens, New York, where he shot videos with a small group of college friends.

The group’s big break came after doing a jazzy cover of Macklemore & Ryan Lewis’ ‘Thrift Shop’ which became viral, reaching over a million views in its first week and climbing to #8 on Billboard magazine’s Jazz Albums chart. Bradlee and crew then followed it up with Miley Cyrus’ ‘We Can’t Stop’ and true enough there was simply no stopping PMJ as it found its way out of Bradlee’s basement apartment and into bigger, more elaborate venues and mainstream consciousness.

Post Modern Jukebox’s choice of material ranges from the ‘80s hard rock of Guns N’ Roses to the most current hits of today and they are performed by a rotating cast of musicians, including numerous American Idol alumni, wearing the same fashion pieces as their version’s particular era or genre.

To date, they have amassed over a billion views on their YouTube channel, and they have covered artists ranging from Lady Gaga to Radiohead, Taylor Swift to Maroon 5 and many others, giving their hits a vintage makeover like jazz, swing and ragtime.

“I take pride in putting together the right powers and personalities to create a unique and amazing experience for our fans,” Bradlee says in an interview. “We want them to escape reality and join us for the most sensational 1920s party this side of The Great Gatsby. We want them to experience what it was like to be at the New Years’ Eve show that Sinatra would have hosted in the 1940s. We want them to feel the excitement of hearing the greats of Motown live and up close. Our goal is to give our audiences their favorite show again and again and still have it feel like the very first time.”

The Houston Press proclaimed, “Scott Bradlee’s project has turned into a worldwide phenomenon in quite a small amount of time, having sold out shows in more than 60 countries around the world – and rightly so.”

And as any Post Modern Jukebox fan can tell you, the experience is never the same twice, with new songs, new sounds, and new members added to the ever-growing family each time around.