Once you see the Slender Man, you cannot unsee him.

In Columbia Pictures’ new terrifying horror-thriller Slender Man, small-town best friends Hallie, Chloe, Wren and Katie go online to try and conjure up the Slender Man — a tall, thin, horrifying figure whose face has no discernible features. Two weeks later, Katie mysteriously disappears during a class trip to a historic graveyard. Determined to find her, the girls soon suspect that the legend of the Slender Man may be all too real.

Executive producer Louis Sallerson describes how the Slender Man character “was created originally as part of a contest on the Something Awful forum by Eric Knudsen (who online goes by the name Victor Surge). Basically, the contest was to take an existing photograph and add something paranormal to it. I don’t think it required a text but Eric added it anyway, submitting two photos that became the original Slender Man photos, making up this backstory about how there had been a burned-down school or library and half the bodies were never discovered. Then he wrote another piece of text detailing something from the perspective of someone who had been taken by Slender Man. I think the wording was, ‘his outstretched arms fascinated us or comforted us and horrified us at the same time.’” 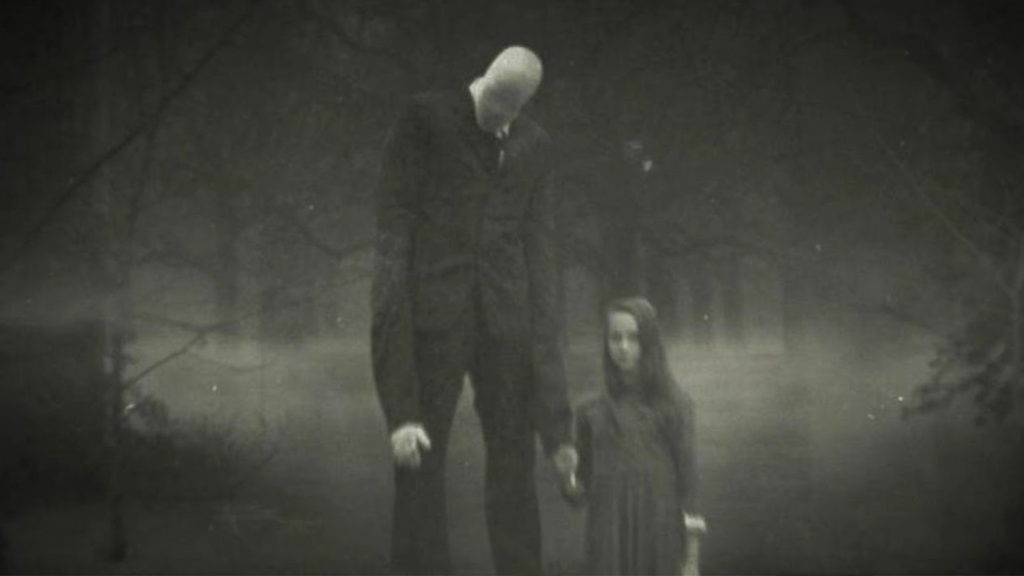 “Back in June 2009, there was a thread on Something Awful called ‘Let’s Create Paranormal Images,’” says Knudsen. “At that time the thread was pretty young, there were only about three or four pages of entries. And I was looking through some of the entries, some of the pictures, and I said, ‘oh, these are really good. I really like how they look. I think I can do some pretty creepy pictures myself.”

As he prepared to create the character, Knudsen remembers, “I created those first two Slender Man pictures that I’m sure most people know about. And then I thought, ‘Well, I don’t want to just do a picture. I want to add just a little extra to it,’ so I made a little bit of micro fiction. I wrote a description of the photo, just to make it a little bit more interesting, and the response I got was immediate. Everyone thought it was kind of creepy and really cool, so I continued making some more posts—I think I made about nine or ten in total, creating a story arc of this thing, this Slender Man that everyone really grabbed onto; they just ran with it and quickly a Slender Man mythology was growing.”

“Slender Man became so popular and went viral. There was just something about him that’s uncontrollable and in some ways belonged to the Internet,” concludes producer Sarah Snow.