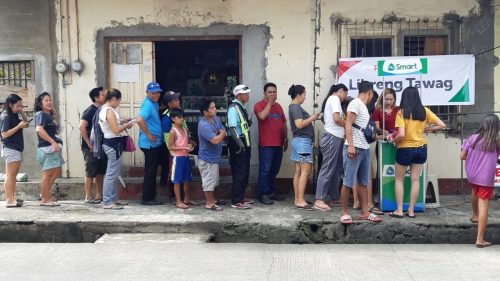 Residents line up at a libreng tawag and charging station in Barangay Rizaliana, Mauban, Quezon. More than 13,000 families evacuated their homes as Typhoon Tisoy caused damage to infrastructure and power lines in the province

Recognizing the urgent need for communication in times of calamities, PLDT and its wireless unit Smart Communications Inc. (Smart) have deployed emergency mobile and connectivity services for communities hit by Typhoon “Tisoy” and the floods in Cagayan and Isabela provinces.

A few days after the typhoon, Smart offered free 300 MB data to subscribers in the affected areas to help them get immediate updates and reach out to their loved ones here in the Philippines and abroad. The free 300 MB data package was valid for two days and given to Smart, Sun, and TNT subscribers in Masbate, Quezon, Surigao del Norte, and other areas heavily affected by Tisoy.

PLDT and Smart also set up libreng tawag (free calls) and charging for the use of affected residents and responders in more than 20 locations all over the Philippines, including Cagayan and Isabela, which were affected by the heavy rains that recently hit ‪some parts of Luzon after Tisoy’s onslaught. ‬‬‬

Even as they worked on restoring network and mobile data services in areas hit by Tisoy, PLDT and Smart extended libreng tawag and charging in areas where commercial power was limited and/or infrastructure and facilities were damaged.

PLDT and Smart deployed these services especially in areas where the lack of commercial power has hampered the full restoration of services. These emergency services help in the rebuilding efforts by enabling communication among residents, disaster response agencies, local governments, the news media, and the private sector.

Smart also donated housing materials to help Albay residents whose houses were damaged by Tisoy. The employees turned over 200 pieces of iron sheets to Team Albay Youth Organizations, who are actively involved in rebuilding efforts in the province.