Hello, Ber Months! Realme Ushers In The Christmas Season With A Price Drop 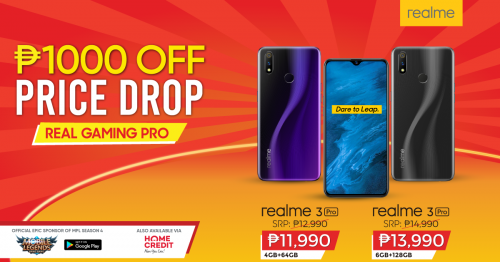 Realme Philippines, the game changer brand for the youth, welcomes the Christmas season with a PHP1,000 price cut for its midrange gaming champion, the realme 3 Pro.

“The Philippines is known for having the longest Christmas celebration in the world, kicking off the festive season as early as September. We at Realme Philippines want to be among the first to celebrate with Filipinos by making one of our top devices more affordable for everyone. The realme 3 Pro is an ideal gift to a gamer friend or anyone eager to rank up their gaming heroes. We hope to be part of granting wishes. Happy early Christmas shopping!” shares Eason De Guzman, marketing lead of realme Philippines.

The realme 3 Pro was the official sponsor of the epic Mobile Legends Professional League Season 3 and is also currently the sponsor of Season 4, further cementing its reputation as a mobile gaming authority. The device was warmly welcomed by critics and consumers alike with its outstanding value for money.

The realme 3 Pro is available in realme kiosks and partner stores nationwide. Customers may also avail of the 0 percent interest, six-month installment plan with Home Credit.