The Filipinos’ world-class singing talent will once again take centerstage as the country’s biggest singing competition “Search for the Idol Philippines” begins its search for the country next singing idol this Sunday (April 21).

The idol hopefuls from all over the world are now ready to impress viewers nationwide with their immense vocal talent and inspire everyone with their unique stories of perseverance. bringing laughter, tears, and inspiration to audiences every week. 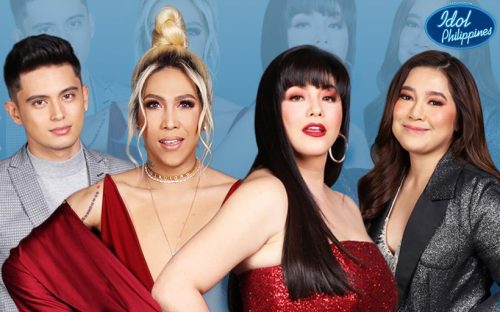 Viewers are also up for more surprises as four of the country’s most prominent OPM stars —Regine Velasquez-Alcasid, Moira Dela Torre, James Reid, and Vice Ganda — join forces for the first time in finding the next vocal superstar.

For over three decades, Regine has proven that she is an OPM icon, with songs that touched millions and who inspired a whole generation of singers. As her first stint as judge in a reality-talent competition, the Asia’s Songbird will share her experience as one of the well-respected Pinoy divas to hone and ready each contestant for stardom.

Moira Dela Torre, on the other hand, defines the current sound of OPM as she made hits after another with her heartfelt tunes and soothing vocals. She was also hailed the most streamed Filipina artist of 2018 by Spotify, making her the hottest OPM star today. As judge, she will use her distinct voice to let the aspiring singers shine and reach their dreams.

From being a TV and movie actor, James is also now a multi-awarded singer-songwriter. He has also built his own record label Careless Music Manila, proving that he can also work behind the scenes as a producer. Having the total package, the Multimedia Prince will inspire the singing aspirants to be an all-around artist to make a mark in the industry.

A record-breaking concert performer, the Unkabogable Phenomenal Box-Office Star Vice Ganda has proven his star power in the concert scene with his yearly sold-out concerts. He has also recorded a slew of hit novelty songs that brought good vibes and became anthems of madlang people. Aside from bringing happiness every afternoon, Vice will also impress viewers every weekend with his on-point comments that will test the singing hopefuls’ determination to win the competition.

They will also be joined by the international RnB sensation Billy Crawford, who will highlight the inspiring stories of the idol hopefuls that will touch the hearts of viewers.

Tune in to the idol hopefuls’ journey on “Search for the Idol Philippines” starting this Sunday (April 21) on ABS-CBN.