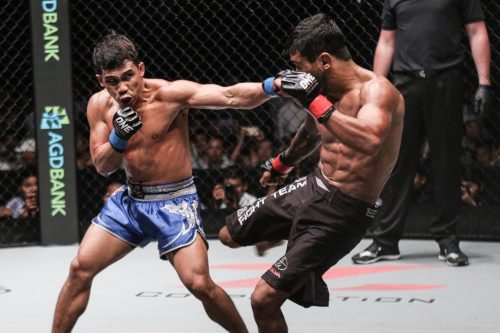 Coming off one of the most productive years in his ONE Championship career, strawweight standout Robin “The Ilonggo” Catalan is certainly turning over a new leaf in high spirits.

Catalan won two of his three fights in The Home Of Martial Arts in 2018, including an impressive submission win over Adrian “Papua Badboy” Matheis at ONE: BATTLE FOR THE HEAVENS back in July.

Though his momentum was halted with a submission loss to veteran martial artist Hayato Suzuki at ONE: KINGDOM OF HEROES last October, that only made him realize the things that he needs to work on moving forward.

“I still want to improve my grappling and wrestling. That is one of our main goals this 2019,” said Catalan.

“Those are areas that we, as a team, feel that we lack and needs major improvement, so we will focus more on that for this year,” he added.

Catalan looks to showcase his continuous development in his grappling when he takes on hometown favorite Stefer “The Lion” Rahardian at ONE: ETERNAL GLORY in Jakarta, Indonesia on January 19.

With five of his nine wins via submission, Rahardian is known for his slick grappling skills – something that is not lost on Catalan.

Catalan witnessed his older brother Rene prepare for – and eventually beat – the erstwhile undefeated Indonesian in a strawweight clash at ONE: REIGN OF KINGS last July.

Catalan, an IFMA Muay Thai World Champion, knows that he has a huge advantage on the feet but he insists that he is not taking this match for granted.

“The Ilonggo” knows Rahardian has his own set of advantages, that is why he is working double time to try and neutralize it.

“I think he’s a good grappler, but his striking is not as a threat as he is on the ground,” said Catalan.

“I’ll study his match against my brother to see how Rene was able to get the win, and maybe add some of the things I have been working on as well.”

At the end of the day, Catalan is confident that his hands will be raised after the contest.

“I just need to follow the game plan that we have. Regardless if it’s a decision or a knockout, my hand will be raised after the match.”

If things go his way against Rahardian, he believes that it’s only a matter of time before he gets catapulted to contendership status.

“I’d like to have more wins. I know the continuous developments in my game will lead me there,” a confident Catalan said.

“Of course, a World Title shot would be great, but I think I need to work on getting more wins to earn it.”