Ryan Reynolds Is The Quirky, Fast-Talking “Detective Pikachu”; Opens In Philippine Cinemas May 9

As fans everywhere know, Pikachu is a Pokémon, and no matter how expressive Pokémon can be with their features, actions, body language and special powers, they are linguistically limited to stating their own names. Inexplicably, such is not the case with this one particular, pint-sized, fast-moving individual in the deerstalker cap: Detective Pikachu.

It might be his caffeine habit, a raging case of amnesia or just his electric personality, but this bright yellow P.I. talks a blue streak. Just try and shut him up.

The fact is, when the story opens, Detective Pikachu is up to his fuzzy little face in mysteries so deep and confounding that he can’t even remember how they started, and he’s not going to rest until he figures it all out. Who is he? What happened to his partner, Harry Goodman? And why is he suddenly able to communicate in human language so that one man—one specific young man, that is, Harry’s son Tim—can actually understand him? 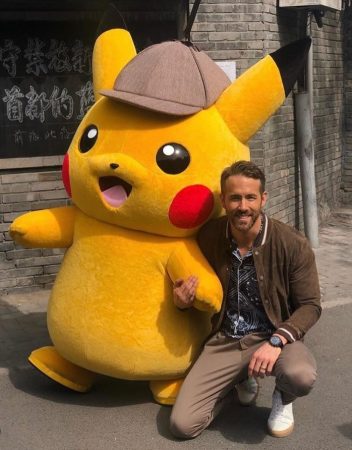 “Detective Pikachu’s got some sass,” says Ryan Reynolds, who brings his spot-on timing, style and irreverent humor to the film’s title role. “He’s got some serious attitude. He’s really a larger-than-life-character, but he has to be. I mean, he looks like a little cotton ball. Imagine if someone flash-fried me and injected me into this little yellow guy; that’s basically what it’s like.

“I’ve worked on films with CG characters before but I’ve never seen this kind of interaction on this scale,” he adds. “It’s pretty special. When you see this fully rendered version of a living, breathing Pikachu on screen, you feel like you could just reach out and touch him and cuddle him. But don’t cuddle him. I can’t be responsible for what he might do.”

And Reynolds’ vocal performance pulls no punches. “There’s something inherently fun about that big personality and Ryan’s voice coming from this tiny, incredibly cute creature. It seems like a disconnect, but it’s completely natural,” director Rob Letterman offers.

Since the movie depends upon their dynamic, the filmmakers sought to give Ryan Reynolds and Justice Smith ample opportunity to establish a rapport. Reynolds and Smith recorded their scenes together in the weeks prior to the physical shoot—an uncommon approach, but one both actors appreciated. Reynolds then remained on set with Smith for the beginning of physical production, feeding him Detective Pikachu’s dialogue via an earpiece, to draw on that connection, after which Smith continued filming with a stand-in reading the lines.

Says Reynolds, “I do a lot of voice work, and this was especially fun because, unlike most situations, I got to interact directly with Justice.” As for being on set afterwards, he concludes, “I wanted to be there to establish a kind of rhythm. A lot of the time we’re talking over each other and we’re a bit like the Odd Couple in a sense, so you need to get that right.”

In Philippine cinemas Thursday, May 9, “POKÉMON Detective Pikachu” is distributed by Warner Bros. Pictures, a WarnerMedia Company. Use the hashtags #DetectivePikachu and #PikaPika