Oscar-winner Lupita Nyong’o stars in Universal Pictures’ new horror thriller Us, playing the film’s central character is Adelaide Wilson, a woman hiding an inexplicable childhood trauma from her past. She discovers that her attempts to push down and suppress the incident now threatens to destroy not only herself, but her husband and her children. 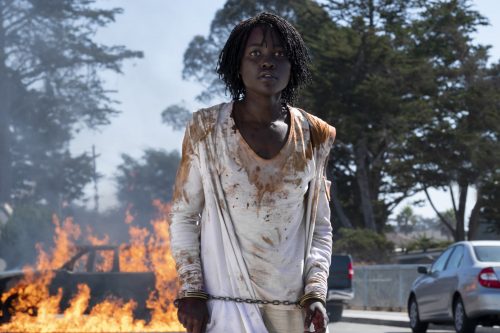 For such an expansive and complex dual role, director-writer Jordan Peele and his fellow filmmakers quickly turned to Nyong’o.

“We’ve admired Lupita for so long, and as we were thinking about casting, we were shocked to realize that she’s never been the star of a film, but has instead always played these amazing supporting roles,” producer Ian Cooper says. “So we were excited at the opportunity to have her as the anchor at the center of this film. Lupita is someone audiences feel they can access and have an identification with; she’s someone you want to spend time with, but she’s also so good at turning the screw a bit and making you feel suddenly alienated from her as well. That duality in her performance was perfect for this film, on multiple levels.”

Nyong’o has vivid memories of her first meetings with Peele about the roles.

“At first, every time I spoke to Jordan about these roles, I felt like I needed to sign up for philosophy, psychology and sociology courses at a university to be able to play them,” Nyong’o says, laughing. “He’s so detailed and, in my first reading of the script, I knew there was more significance to it than I had caught onto. It wasn’t until I spoke to him that I realized how much he was investigating and trying to unpack in this one story within the horror genre.”

Nyong’o continues, “Early on, I asked Jordan which films were influencing this story or had inspired his imagination. He created a list for me of films to go through that ranged from Dead Again to A Tale of Two Sisters, The Shining, Alien, The Birds. That was very informative, not just for how he was framing this world, but also for specific moments in those films that he pays homage to in Us.”

“One of the themes Jordan said he was interested in exploring was the sense that one of America’s biggest flaws is being unable to recognize its own demons,” Nyong’o says. “That is a powerful thing to be able to do, because it’s what real self-acceptance is: the ability to recognize both your most noble and your most destructive sides.” The idea intrigued her. “We cast judgment on people,” Nyong’o says. “We decide who is good and who is bad. But the truth is that we all possess that duality. That’s a really powerful statement to make, for us to recognize that evil is not an external force but is very much part and parcel of our experience as human beings.”

Peele also gave her a warning before she agreed to take on the film. “One of the first things Jordan said to me was, ‘Lupita, you’re going to be very tired,’” she says, laughing. “And he delivered on that promise! I feel like I’ve made five films, and we’ve only just made one. This was a really intense and all-consuming film to be a part of.”

In Philippine cinemas March 20, Us is distributed in the Philippines by United International Pictures through Columbia Pictures.

Team Orange 07 Aug 2020 0 comments Events
The Itchyworms will be hosting a virtual album launch to celebrate the release of their highly anticipated fifth album, Waiting For The End To Start. A few hours before the…

Team Orange 07 Aug 2020 0 comments Advocacies
ABS-CBN Corporation and ABS-CBN Foundation (AFI) commemorate the first death anniversary of Gina Lopez with a month-long celebration of her legacy, which will be showcased on their various cable TV…