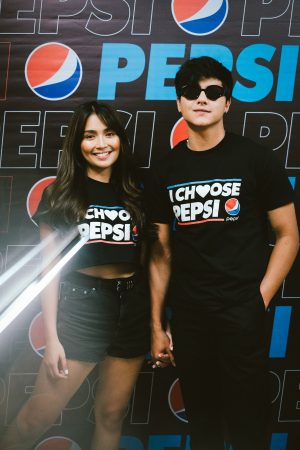 Unveiled as the newest endorser of Pepsi Philippines, Kathryn joined her longtime love team partner, Daniel Padilla, among others, as part of the Pepsi family.

“Something that Daniel and I share is the belief that we should follow our hearts and do the things we love. Just go for it 100%! That’s why this year, I really told myself I’m going to go all-in,” she said.

“I’m thrilled to join Daniel in encouraging people to do the same, as part of the Pepsi family,” Kathryn shared, as she was introduced at the recent Pepsi Taste Challenge held at TriNoma mall. The event also featured different Pepsi influencers and endorsers like Daniel Padilla, Mimiyuuuh, JinHo Bae, Pamela Swing, Alyssa Valdez, Kiefer Ravena, and Ricci Rivero. Various fun and interactive activities such as Pepsi-oke, a live vlogging challenge, and a digital roulette and extraordinary performances from inspiring local artists including Matthaios, Autotelic, and SB19 entertained the audience.

The Pepsi Taste Challenge celebrates Filipinos’ love for cola and dares them to challenge their preconceptions through a taste test in different cities around the Philippines, to find out whether people prefer the refreshing bold taste of Pepsi vs another cola brand. The event will also take place in Cebu and in Davao – two of the most bustling areas in the country.

“Kathryn embodies a refreshing personality which Pepsi represents,” said Gutzee Segura, Marketing Manager of Pepsi Philippines. “Like Pepsi, she has always been a crowd favorite. As a matter of fact, during our Pepsi Taste Challenge held in different countries around the world such as UK, France, Italy, and Australia, among others, most of the people picked Pepsi over other cola brands.”

“Apart from these though, Kathryn’s amazing dedication to her craft serves as an inspiration to countless fans”, Gutzee shared. “With her passion and her knack for following her heart, she really personifies what Pepsi stands for,” she added.

#SundinAngPuso and put your cola taste to a test, with live performances from local artists at the upcoming Pepsi Taste Test Challenge events: SM Seaside Cebu on February 22, 2020 and SM Lanang Premiere Davao on March 7, 2020.