Stream “Miracle In Cell No. 7” for FREE on WeTV and iflix 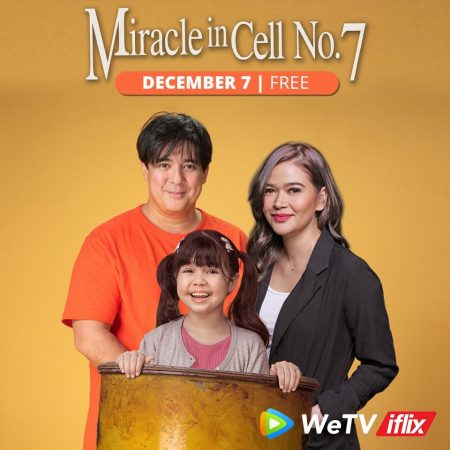 There’s a bit of a chill in the air as December begins and everyone is trying to get into the Christmas spirit. With the year that 2020 has been, everyone is looking for creative ways to bond during the holidays. We’ve got one for you – movie night streaming the heartwarming movie Miracle in Cell No. 7 with the whole family – for FREE only on WeTV and iflix.

The Aga Muhlach – Bela Padilla blockbuster hit was the initial Filipino movie offering of WeTV Philippines when it launched a few weeks ago. The lead cast of the film were in attendance, sharing their enthusiasm at having the movie available to a wider audience through the platform.

Produced by Viva Films, Miracle In Cell No. 7 is an adaptation of a Korean film of the same name, which ranks as among South Korea’s highest-grossing domestic films of all time. Directed by Nuel C. Naval (A Secret Affair, This Time), this official entry to the 2019 Metro Manila Film Festival stays faithful to the original plot. Fans of the original movie trooped to the cinemas, making it the festival’s biggest box-office hit of the season.

Aga Muhlach displays his acting chops as Joselito, a mentally-ill man who is wrongfully charged with sexual assault and murder. When he goes to prison, he leaves behind a very loving daughter named Yesha (played by the charismatic Xia Vigor) who now has nobody to care for her. In his innocence, the only thing Joselito wants is to be with his daughter, so his fellow inmates device a plan to smuggle his young daughter inside the cell. The bond that is formed between Joselito and his cellmates, and how Yesha brought out the out the best in them may just be the miracle in cell no. 7. Years later, a grown-up Yesha (played by Bela Padilla) becomes a lawyer and is determined to clear her father’s name.

Download the WeTV and the iflix app from the App store and Google Play so you can create meaningful bonding moments with the family while streaming Miracle In Cell No. 7 for FREE. An early Christmas gift, exclusively from WeTV iflix.