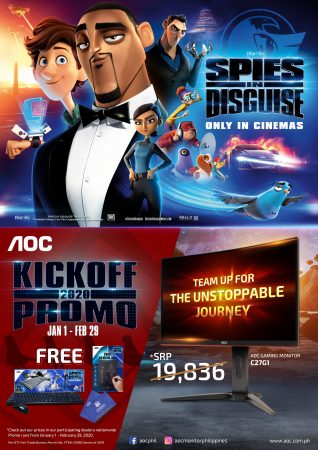 AOC, an innovative leader in display technology, has teamed up with the global entertainment powerhouse, Twentieth Century Fox, to become the official monitor partner of the new film “Spies in Disguise”. The official US release date of the film is 25 December 2019, with actual release dates to vary between countries. AOC’s superior technology and specifications have been synonymous with the latest and previous collaborations with Twentieth Century Fox releases. With its enhanced visual technology, AOC is the perfect companion to go to for unstoppable, thrilling cinematic journeys. 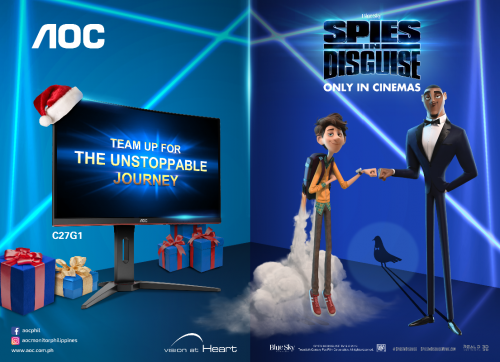 Having supported Twentieth Century Fox in promoting countless blockbusters such as, The Martian, X-Men First Class and Kingsman: The Golden Circle, AOC is the trusted partner to deliver immersive and dynamic cinematic experiences to the audience. AOC’s unrivalled capabilities take viewers through every scene with confidence, strength and power.

Twentieth Century Fox presents a Blue Sky Studios production, “Spies in Disguise,” an animated spy comedy adventure set in the slick, high-octane, globe-trotting world of international espionage. Super spy Lance Sterling (Will Smith) and scientist Walter Beckett (Tom Holland) are almost exact opposites. Lance is smooth, suave and debonair. Walter is…not. But when events take an unexpected turn, this unlikely duo is forced to team up for the ultimate mission that will require an almost impossible disguise – transforming Lance into the brave, fierce, majestic…pigeon. Walter and Lance suddenly have to work as a team, or the whole world is in peril.

The inseparable duo mirrors AOC’s partnerships with the Twentieth Century Fox. AOC is devoted to becoming the go-to, high-tech display solution for users from all walks of life. AOC is a global leader in monitor display technology. Equipped with ultra-high contrast, crispy color depth and incredibly detailed images, AOC has illuminated the lives of a large audience with exceptional ocular experiences. It is the ideal partner to team up with to provide the best support for any endeavor be it gaming, work or leisure. The characters’ use of innovative technology coupled with sophisticated spy techniques to save the world from peril are exemplary qualities that distinctly reflect AOC’s capabilities, making the Spies in Disguise film a perfect fit for collaboration. 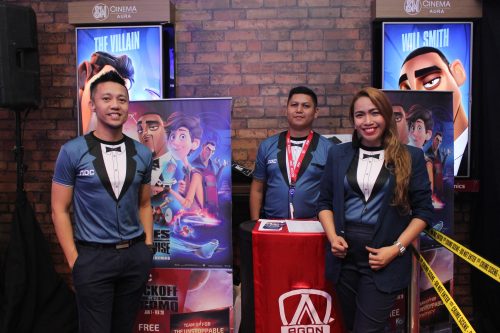 As the film’s exclusive monitor partner, AOC Philippines held an exclusive film screening on January 16 at SM Aura with select members of the media. Lucky attendees received exciting prizes and merchandise in celebration of the film. The media’s continued support help AOC keep its position as a leading monitor brand in the country.