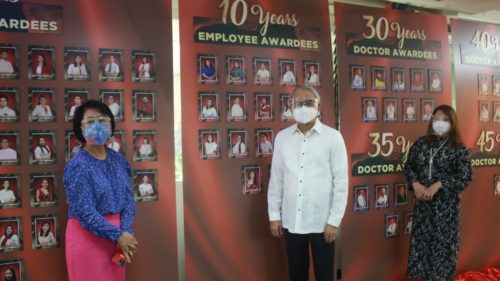 Every year, Cardinal Santos Medical Center (CSMC) culminates its founding anniversary in August through the celebration of People Awards, an awards ceremony where the years of service of its employees and doctors are recognized. With the theme, “Pagbibigay Pugay sa mga Nagtataguyod ng Buhay”, this year’s celebration was held virtually on August 31 via the hospital’s Facebook and Youtube channels.

Since its acquisition by the MVP Group in 2008, CSMC has been under the supervision of the Colinas Verdes Hospital Managers Corporation. Under the new management, 89 individuals across all departments were awarded for their loyalty and dedication to the hospital: 66 employees who have served the institution for 5 and 10 years, and 23 doctors who have devoted their time and services to the hospital for 30 up to 45 years.

“Doing good and doing well is a culture I have seen and felt at CSMC,” Palisoc said. “We are proud to be part of an institution that continuously makes a difference in our communities, and in the lives of people who learn, grow and serve at our hospital.”

In celebration of its 47th Founding Anniversary this year, San Juan City Mayor Francis Zamora; His Eminence Jose Cardinal Advincula Jr., Archbishop of Manila; and Rodrigo Duterte, President of the Philippines offered their greetings and well wishes to the entire CSMC Community.

Mayor Zamora expressed his heartfelt gratitude to the volunteers of CSMC for helping the San Juan LGU to “vaccinate, by this time, about 90%” of its total population. Likewise, Cardinal Advincula acknowledged the risks and sacrifices that CSMC front-liners take in order to sustain and save lives, emphasizing in his message that what they do “is not just work but mission.”

President Duterte noted the important role of the institution in providing the best quality of healthcare to the Filipino people, especially during this pandemic, and expressed his confidence that the country will “fully recover from the present challenge and emerge as a stronger nation” with the help of CSMC and the rest of the healthcare providers in the country.

The event was concluded by Mr. Raul C. Pagdanganan, CSMC’s President and CEO, who gave a short speech applauding the efforts of all the service awardees.

“Now more than ever we recognize all the sacrifices you put in to make Cardinal Santos Medical Center the safe space for healing, and the center for medical excellence that the people need,” Pagdanganan said in closing. “To you, we are truly grateful, and we will never get tired of calling you our family. We look forward to a better and brighter future with all of you.”