AirAsia celebrated its maiden flight from Manila to Zamboanga with Z2 651 arriving at Zamboanga International Airport at last October 27. 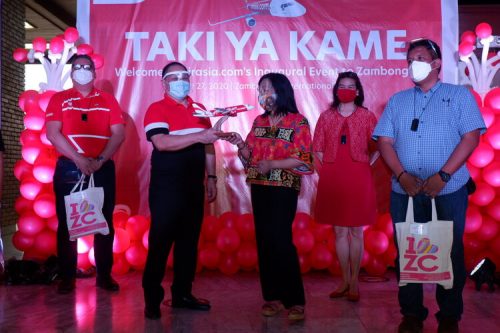 The aircraft was welcomed with a traditional water cannon salute. Guests and VIPs on board this inaugural flight were welcomed at the airport by Department of Tourism Assistant Secretary Myra Abubakar, Zamboanga City Mayor Hon. Beng Climaco-Salazar, Mr. Antonio Alfonso of the Civil Aviation Authority of the Philippines Zamboanga, Mr. Pocholo Soliven from the Zamboanga City Chamber of Commerce, and Ms. Sarita Sebastian from the Zamboanga City Tourism Office.

AirAsia Philippines CEO Ricky Isla said, ”We are excited to celebrate this milestone as we paint Asia’s Latin City’s skies red. As the second largest city in Mindanao and the sixth most populous in the Philippines, this new destination will pave the way for expansive connectivity, bringing Filipino families closer together, and providing more opportunities across provinces in support of the local government’s vision to be the Asean economic hub in Southwestern Mindanao.

“All of this would not have been possible without the initiatives of the Zamboanga City Government, who took on a decisive role in discussions with us to establish this route. For this, we are truly grateful.”

The Mayor said, “AirAsia’s presence in Zamboanga sparks hope and brings in more reasonable and budget-friendly options in air travel that will help businesses recover with all the impacts brought by the pandemic. Enhorabuena y vaya con Dios.”

To celebrate this new destination, AirAsia is offering all-in promotional fares from Manila to Zamboanga from as low as P765 for BIG Loyalty Members for booking from today until 1 November 2020 for travel between today and 30 June 2021.